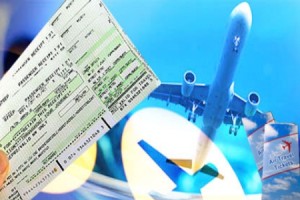 [Calif., USA – April 11, 2012]  Okay, so Eddie Money had “two” tickets for paradise.  Well, I only need one.  And I’m making it a one-way ticket at that.  Yes, today was a milestone day after nine months of preparation and finally getting online to shop for and purchase my airline ticket to the Philippines!

I’m telling you, when I hit that “Purchase” button my heart was beating faster and I took a few deep breaths waiting for the confirmation page to appear.  I was worried for 6 seconds that fate might somehow prevent me from having a ticket of my own to my long-awaited destination.  The confirmation number came in and then I just leaned back in my Starbucks chair and let it sink in.

“I’m going to the Philippines.”  That’s all I could run through my mind.

Now, for those of you planning to go to the Philippines, I should mention that you can’t just jump on a plane with a 1-way ticket and stay forever in the Philippines.  You need to arrive and show the Philippine Immigration at the airport your “continuing flight” OUT of the Philippines before they let you go run amok in the white sandy beaches.

Like they say at ‘closing time’ at the bar.. “You don’t have to go home, but you can’t stay here.”  Being a tourist pretty much works the same way.  You arrive and can stay for about 20 days, after showing you have a flight ‘out’ of the country already paid for.  You don’t have to go back to the US, but you do need a flight continuing on to Thailand, Singapore, India.. anywhere outside of the Philippines.  Going from one island to another does not count.  So, since a round-trip ticket back to the US costs about $400-$600 more (depending on which airline, plus the cost of extending the departure date).. So instead I got a 1-way ticket for a separate flight from the Philippines to nearby Thailand.  Also known as a “throw-away” ticket.  Why?

Well, remember that 20-day limit?  Before that’s up, you get yourself to the nearest Bureau of Immigration (BI) and request an Extension for about $20 (or less.. the exact amount for the fee and length of a tourist stay is at the Philippine Bureau of Immigration website, found in the Resources/Links section) and you’re golden for another 2 months.  Simply repeat for the rest of the year.  There are some other fees too, but that’s all covered at their website.

After a year.. you need to leave the country for about 24-48 hours (I still need to check on exact time, but I’m fairly sure it’s not more than a day or two) and then you can re-enter and repeat the process.  After awhile you can apply for longer extensions.  (Or eventually get married to a citizen there and that makes staying much less of a hassle.  Just remember.. no divorce is allowed in the Philippines.)  As for that $40 “throw away” ticket, it expired months ago and you’ve long since “thrown it away“, but at roughly $80 round-trip to a nearby country it’s a much cheaper option than flying back to the States just so you can fly back again.

As for the trip, if leaving from California (as I will) it means roughly 20 hours of ‘in air’ flight time.  You’ll be flying across time-zones and that gets kinda confusing that you’re in the air for 15 hours and arrive in Hong Kong for a layover only 6 hours later.  Kinda mind-bending.  Just stick to your itinerary and you’ll be fine.. leave the time-space continuum stuff to people who majored in physics.  From Hong Kong it’s about another 4-5 hours and bamm.. you’re in the Philippines.  Shave some time off it you happen to get a non-stop flight.

From what I hear the airlines know it’s a long-ass time to be on a plane so they provide movies and earphone music to try to keep people sane.  I plan on taking my laptop to do some writing, a book to do some reading and maybe my own movies to watch on the laptop.  20 hours is long no matter how you slice it, but it sure beats 3 months on a slow boat to Asia.

As for me.. I’m traveling light.  My laptop bag and ONE suitcase.  I doubt I’ll even fill the suitcase.  Getting my 20″ monitor in there and ‘maybe’ my scanner, padded with just enough clothes to get by for a week.  Once I’m there I plan to get clothes that are better suited to the humidity.  The temperature in the Philippines is fairly constant annually.  Humidity is always High but temps stay in a fairly constant range.  So.. new wardrobe when I get there, leaving my jackets and suits behind me.  (I’m still debating whether to take a backpack, with just overnight stuff and my camera.  Might be a good idea.)

Just a few more items on my ‘to-do’ list to wrap up some loose-ends and then it’s ‘count-down’ time!  Looking forward to it.  Stay tuned by entering your email into the email-list box at the bottom of the page.  No spam from me, just updates on new articles.  See you next time!