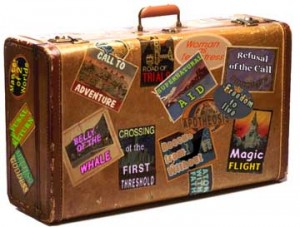 If you haven’t yet read them, here are the links to Part 1 and Part 2.

[Calif., USA – July 2010]   Now that I’d decided to “make the move” I had a whole lot of reality to deal with.  I could hardly sleep with both excitement and anxiety over such a great transition.

Thankfully, as I took inventory of my life, I’ve always preferred to travel lightly through life.  I’ve been something of a minimalist, only accruing “things” during my married years.  Wives and kids need the kind of stuff that fills a household.  But as I walked around my 3 bedroom, 2 bath mobile with a new set of eyes.. I could hardly see anything at all that I wanted to keep.  It all looked like an anchor in some way or another.  Just more heavy, unnecessary useless crap that I’d accumulated along the way to make life easier in some way.

I got on Craigslist and Facebook and started selling everything in sight.  “Everything must go!”, and go it did.  By September I’d sold about 80% of anything with value.  What wasn’t useful filled my trash bins repeatedly for weeks.  I boxed up the unsold useful items and gave several van loads of clocks, lamps, furniture, vacuum cleaner, coffee maker, dishes, clothes.. all to my ex brother-in-law who would then sell it in Mexico to support his Mother.  The more stuff that went out the door the closer I felt to my goal in Cebu.  It was like a weight off my shoulders.  I felt better seeing it go than the day I’d bought all this stuff.  After selling the refrigerator I boxed up all the frozen and dry goods.  I placed an ad in Craigslist asking if anyone needed a massive amount of groceries.  Twenty minutes later I was in the car and unloaded all that as well.

I had an offer from a friend to stay with her until catching my flight.  But staying with family for the remaining six months before leaving was the best option once I got rid of my property.  This would give us time to visit before I caught my plane in July.  If it weren’t for family I probably wouldn’t even entertain the idea of coming back for another five years.  But I know that family isn’t around forever so I plan to make a return trip sometime after a year or so.  I have plans for using a Magic-Jack and sending hard-copy photos to the pharmacy near my folk’s place from online to make the distance seem not so far for them.  My kids are Net-savvy, so Skype and Facebook will be essential in keeping in touch with them and my many friends State-side.

This brings me up to March of 2012.  I’ve successfully gotten rid of 90% of my belongings with what remains now in storage.  The closer I get to my departure the less things I feel the need to take with me.  At this point it’s looking like I will be taking just one suitcase and perhaps one cardboard box.   I bought a laptop so that I can sell off my desktop.  I was planning to take along my fruit/veggie juicer but, after considering the hassles I might have either with TSA or paying some incoming tariff, I concluded it’ll be cheaper and less hassle to just buy another one once I get there.

It’s interesting the things you decide ‘must’ go with you.  Cotton swabs and fingernail clippers.. must stay civilized.  A portable fan.  I don’t want my first night in that humidity to be spent wishing I’d brought my fan.  (runs on ‘D’ batteries if needed).  Cameras.. for posterity.  Must chronicle the adventure visually as well as in words.   Some clothes, but not much.  I plan to get clothes there that are better suited for the weather.  An inflatable bed.. just in case.  Any small, non-firearm weapons I’ll have to get over there.  To have around the house, again.. just in case.  I’d rather have a small baton under the mattress than need it and not have it.  Antacids.. lots of ’em.  Some fiber as well.. no telling what a whole new diet will do to my system once I’m embedded for the long haul.

I still have a few legal items to wrap up.  Not skeletons or bodies in the desert sort of things.  Just taking care of my parent’s estate, boring stuff like that.  Then one last burst of earning up some more money before catching a flight in  July.

Sometimes I lay in bed at night thinking to myself, “Are you insane?”  I mean, geographically it’s the OTHER SIDE OF THE PLANET.  Socially it’s a whole other beast than anything I’ve ever known.  Aside from my girlfriend who will be on a neighboring island.. I don’t know a soul.  I do know a guy who is several islands and about 24 hours by boat away.  But pretty much when I wake up in the morning over there in July.. I’ll have to find my own way.

But then.. after the initial dose of adrenalin induced panic subsides I keep coming back to the same conclusion.. I’d have it no other way.