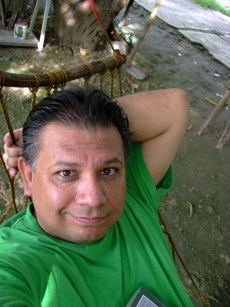 Just like being in a relationship, things go much better when your needs are being met. I think the same applies to starting a new life with a foreign country. Prior to arriving and up until recently the big question in my mind was, “What could go wrong?” I kept wondering if I packed the right items, forgot anything, etc. Arriving, my first concerns were locating clean drinking water, internet, cell phone and food sources. Once these major items were secured it was then a matter of getting items I needed for my studio for daily living. Little by little each day I built up a place of refuge that I could call ‘home’ in this foreign land.

Now, granted, it’s a single-man’s studio.. but it’s the only domicile I have at present. It’s secure, clean and newly constructed. It’s a place to keep my ‘stuff’ and lay down my head at the end of the day. Everything ‘out there’ in this foreign land I’ve chosen to live in is outside my control. But this space I have to live in is where I customize it with my own list of creature comforts that are important to me. And what I have confirmed here that I practiced in my former land is the concept that there is beauty in simplicity.

As I’ve mentioned before, I’m something of a minimalist. I like life to be simple, whittled down to just the stuff I need and the people that make a positive impact in my life. I save complexity for my thoughts, where I spend away the days analyzing just about everything from every possible angle. Having too 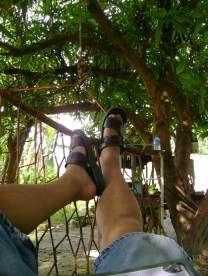 much stuff, or drama, going on interrupts my focus.

So, as I began to say, up until now I’ve had the overwhelming ‘feeling’ of being a stranger in a strange land. It’s unavoidable. So many things are literally foreign to me here. Things are done for a different reason or via a method I’m not familiar with. And I love the little adventures that this provides. For two weeks I’ve been in search of a wider table that I could devote solely to my laptop and related ‘tech’ items.. a committed workspace. When I first arrived I only had one small table which served as my work-center, dining table, food-prep location and general place to just put stuff when walking in the door. Not very efficient. But everywhere I looked for a table it was either over-priced, too small or already damaged. Today I found just the right table at the marketplace and set it up solely for my tech/work space. And I am just as happy as a monkey with a banana. The only time getting more ‘stuff’ is worthwhile is when it serves a good purpose and this simple item.. a table, makes my life so much simpler.

Now I can actually keep the blender and rice cooker constantly plugged in on the other table.. AND have a place to eat my meals without moving cables, DVDs, cameras and speakers each time. A table just for eating. Wow. At this rate I can entertain company. But not anytime soon, aside from my girlfriend.

After setting up my table and being altogether pleased with myself, I went out into the cool afternoon (we do get some cool afternoons here every so often).. and I spent some time in the hammock that is strung beneath the shady branches of several mango trees just beyond my front porch. I swung there lazily, looking up into the varying, cool colors of green leaves above me and just enjoyed some time doing absolutely nothing for about 45 minutes or so.

After a while of that I came back inside and pulled one of the fresh pineapples out of the fridge that I’d bought while at the marketplace that morning. The vendor there cut away all the outer rind, thus leaving me with a large, singular block of pure pineapple fruit. I sliced it up and slipped it into the blender with some mango and purified water. A bit of whirring and I now had a pitcher of fresh fruit juice to quench my thirst. Thick and pulpy.. just the way I like it. Earlier today I had a great lunch of lumpia and a variety of grilled chicken skewers with some hanging rice. Now it’s early evening and in a while I will take my evening walk, about a mile, for some exercise and.. more chicken skewers cooked up at a bbq place run by my maid.

My point in all this is that it really doesn’t take much to make me happy. I have my free time, plenty of creative projects to keep my mind busy, a few good books to read, a novel to write, plenty of good food to eat and interesting people I run into almost every day. I would say the only major difference in my mindset between here and when I was ‘back home’ is the amount of hours I spent working, working, working to make ends meet. Back home I lived a simple life and was pretty happy. But I never really took a day off. I enjoyed what I was doing, running my own PC repair business and met lots of cool people doing that as well. But the traffic, driving and fast-food were taking their toll on me each and every day.

Here, even a ‘troublesome’ day is not all that bad. Yesterday, for instance.. I awoke to find not only was there no water (which happens about once a week here.. water pump fails to fill the water-tower at night sometimes).. but I had forgotten to fill my own basins the night before for just such an occurrence. Usually I have two basins on reserve so I can at least take a shower. So there I was yesterday.. not only no water to bathe but I was supposed to catch a cab to Cebu in a while to meet with a reader from my blog who had come in from Bangladesh on business. I waited but.. still no water and I had to leave within 2 hours. So.. I improvised. I grabbed a towel and walked about two blocks away to a hotel. For 40 pesos (about $1.25 USD) I now had access to both a shower and the swimming pool. Problem solved. And I had a full hour to spare. After showering off I took a relaxed swim in the warm sunshine.. having the pool all to myself. Cool, clean refreshing water.. a perfect day for a swim and the day was only getting started.

Like most of us, I’ve reached for more complicated scenarios in search of ‘fun’ or contentment. Vacations to Las Vegas, for instance. Four hours of driving, check into the hotel, get out to the casinos.. lose a bunch of money, get a quick bite to eat, hit up a dance club, get hammered and take a long walk down the strip 13 hours later before finally crashing into my hotel room. OK, so it was ‘fun’. But in the end I was tired, a bit hung-over and my wallet was a bit lighter. Plus, I still had that four hour drive to get back home. In the blazing heat.

But days like today.. as I lay there in that hammock, I just said to myself; “This is nice. Simple, but so satisfying.” And no hang-over.

I’m not against big productions. I’ll probably be making a trip to Bohol in the next two weeks to take a look around. I already know there’s no way I’ll pack everything Bohol has to offer in just a few days. My game-plan is to just arrive with a bit of Net pre-prep in my head and do whatever seems interesting. I’m not going to go on a mad-tour. Just gonna take it as it comes. Sort of like a recon mission, to look around and get data for my future trips to Bohol because I have a feeling I’m going to want to return there several more times.

Life has many variables. We can easily make things as complicated as we want them to be. But, give me the simple life. Good friends, good food, work I enjoy and an interesting environment. Some people find that in New York, California, Canada, Australia, Italy or wherever their bliss leads them . Me.. I’m content here in the Philippines. There is still so much more for me to explore and I hope to see most if not all of it. But not in one week or even one year. Eventually, when I have the funds, I hope to spend a month or more in Florence, Italy as a short getaway to appreciate the art and food there. But right now, I’m going to have another glass of fresh pineapple juice, my evening walk, a refreshing shower and a good night’s sleep. Tomorrow is a new day, with new adventures and opportunities.

Contentment with life’s simple pleasures has done nothing to diminish my ambitions or goals. It just simplifies and paces each day’s joy to a rate I can appreciate it more fully.