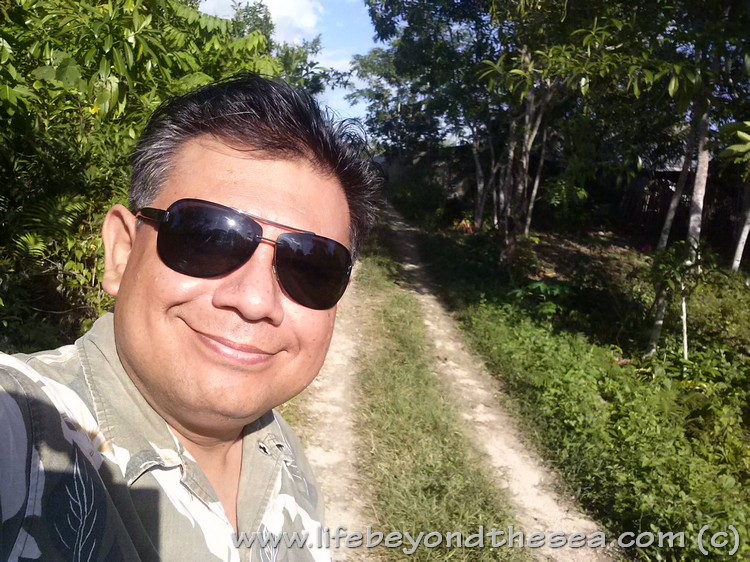 I originally thought, back when I was still on Mactan, that I would simply load up everything on the boat.. get here.. unload and be back online writing in two days.  Yah, so much for that plan.  It’s now been exactly seven days since I brought my things to the new island and only now is the primary dust beginning to settle.  It’s been a busy, but fulfilling first week here on the beautiful island of Bohol.. my new home!

I will be doing a tour of the actual home later, after I’ve had a chance to do some fixing up.  The home was built only two years ago, so it’s a new construction.  But the original owners stopped at the finishing items such as painting, tile, etc.  I see it as an opportunity to paint and design the way I want it and already have some cool ideas for the bathroom (CR).  It will take about six months or so but there’s a carpenter here in the small ‘village’ to do all the stuff I don’t know how to do.  (which is most anything aside from painting)

As for the neighborhood.. it is extremely QUIET here, both day and night.   No traffic aside from maybe three times a day when the neighbor passes by on a motorcycle.  Aside from that, maybe a rooster or a dog wanders lazily by once in a great while.  I have my PC desk located at the window which looks out into the yard.  Over the bamboo fence, from the window, I have a great view of the green trees that surround the place for miles.   Twice it has rained extremely hard and glad to report no leaks in the roof and no matter how much water comes down, there is a small trench in the cement that redirects the excess water right back out of the property and down into the path that is used as a ‘street’.  The islands 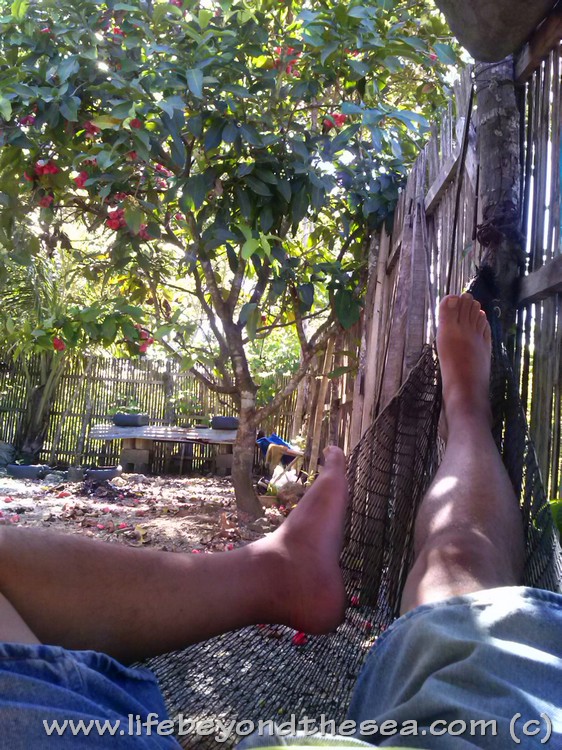 here are actually coral formations so when there is massive rain you don’t get much ‘mud’ to even take notice of.  The water just moves along cleanly and ten minutes after a downpour.. everything is clean and green.  🙂

As you’ll see in the video (below) the ‘village’ is not all that big.   Maybe less than twenty houses in an area about 25 square miles, with lots of trees in-between.  There are some paths nearby that lead into the uninhabited areas.  I plan to check that out on a day-hike sometime.  Not so sure I’ll find anyone willing to go with me.  The neighbors I’ve met so far are very friendly but they pretty much keep to themselves.  It’s mostly families with kids, a few older people and a small gaggle of teenagers who play basketball around sundown at a make-shift dirt court down the road.

There’s one, single ‘sari-sari’ store located about five blocks from here.  It’s run by an older woman from her home.  She mostly sells stuff like packets of Nestea, coffee, sugar, rice, eggs, dry noodles and some candy.  No actual ‘groceries’ to speak of.  For that I needed to hitch a ride with a neighbor who was kind enough to take me to the supermarket at the mall so I could get what I needed for the week.  Interestingly enough, the home I’m renting has a sari-sari store already built into it!  It has the windows to the street, inventory room and is connected to the main living room so I could actually start up my own store here if I wanted to.  If.. and that’s a big ‘IF’ I were inclined to do so, I’d simply sell anything the other lady doesn’t sell.  There aren’t many people out here but if I can save them a trip “into town” then I’d be sure to get their business since I’m right here within walking distance.

On the positive end.. it would be some extra money and since I’m usually home, I could monitor it while working online with no real change in my schedule.  It would act as a ‘pantry’ in case I needed anything from town as well.  And, as I said, the store is already built and part of the house so no construction needed.  However, on the down-side.. I know from speaking with others that you gotta be a hard-ass “No Credit / Cash Only”, no-exceptions kind of guy or else the sari-sari store becomes a “sorry-sorry-can’t-pay-my-tab” enterprise.  People swear they will pay at the end of the week and then, they’re back for more stuff on credit without paying their first tab.  But.. when I have some extra cash I may give it a go.  Maybe I’ll just sell booze, cigarettes and cold sodas.  I don’t know.. I’ll have to give it some more thought.

The walk I took in this video was about two hours before sundown.  Later that day I took a walk around in the dark.  With no moon out.. out here when it gets dark it gets DARK.  You know how dark it gets in the forest when you’re out camping and stray from the campfire? Yah, that dark.  But you look up and it’s the most beautiful thing you ever saw in your life.  When I did so that night, without even hesitating I said the same thing Dave Bowman said 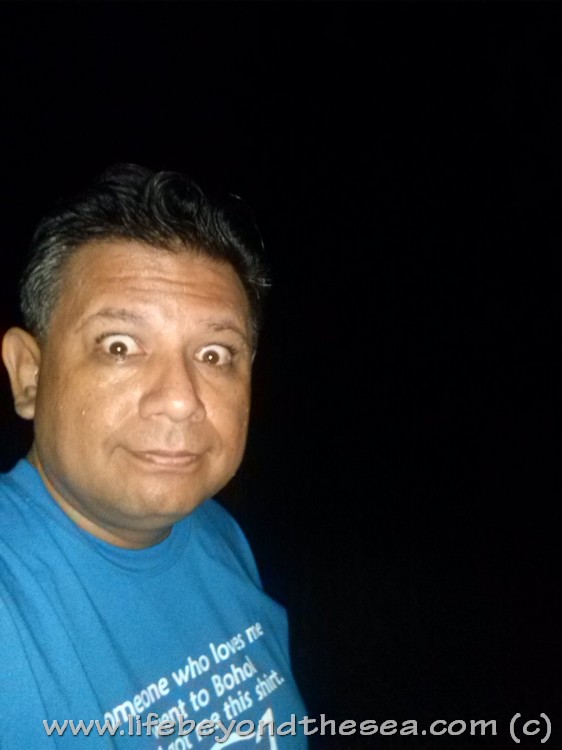 in the film, “2001”.., “My God, it’s full of stars!“.   It was like standing on a platform at the edge of outer-space itself.  I tell you.. being on an island out in the ocean with almost zero light around you.. the stars are so numerous and bright you feel you could just reach out and grab one.  It’s the kind of experience that strikes awe down to your primal core.  Both frightening and amazing at the same moment.

As if that weren’t enough.. for the first time I looked around and there were fireflies.. real fireflies lighting up around me in random fashion.  Like little flying LED’s they flitted about me turning on and off.  I stood still and just watched them.  At first many of them were about ten feet away.  But then one of them slowly came directly to me.. almost as if it were curious to view me closer.  It hovered in front of  me only two feet away for about ten seconds and then drifted off back to join the others.  Altogether I’d say there were about 30 or 40 fireflies around me.  Up until that night the only ‘fireflies’ I’d ever seen were the fake ones in the ‘Pirates of the Caribbean‘ ride in Disneyland.  The real thing is just fascinating.  Every so often one comes by my window at night.  I just can’t get over how magical they seem.

I’ll go into more detail on life here my first week in another article.  For now, enjoy my little tour of the locale and be sure to visit our new Forum that I recently added.  See you there!