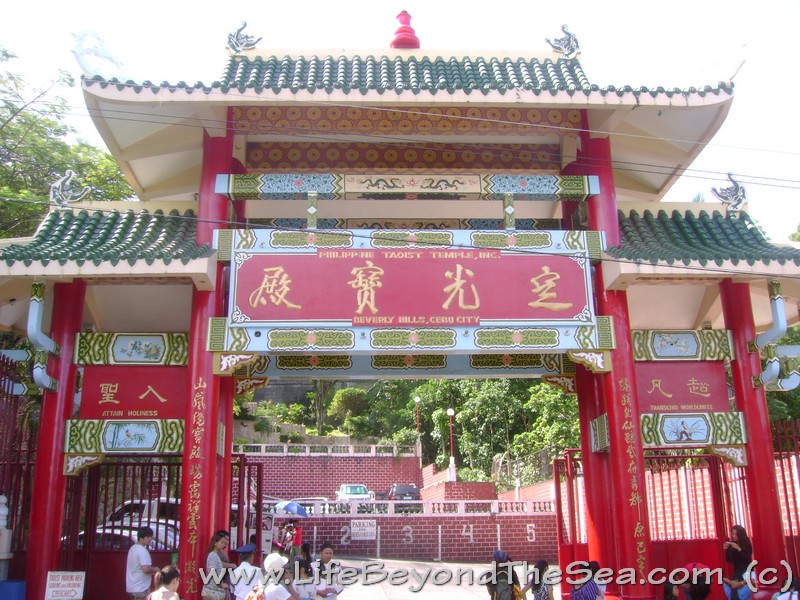 I had heard about this temple since before leaving the States so I finally took a day to go across the bay and up the hill and check it out.  It’s a very beautiful, simple place.  Usually very quiet with not too much foot traffic.  A steady flow of tourists but also those who come here to do their petitions at the altar.  I was expecting to see monks in orange robes, but apparently this location is not a ‘monastery‘, it’s a Taoist Temple.

I’ll make my way to a Buddhist Monastery when I get around to taking a flight to Thailand.  For now, my visit to the Temple was peaceful for the most part.  There are no concession stands, it’s just a very nice place to chill out and enjoy some spectacular views overlooking the Cebu skyline.  Just over the harbor I could see Mactan.  It’s also slightly cooler up there, so that’s a bonus.  Fortunately for me I had just gone to the bakery the night before and had some cheese-filled rolls in my backpack.  I had also brought a large bottle of half-frozen water so I was able to take a comfortable seat and enjoy a simple snack there in the shade as I watched the tourists wander in and out.

After doing my photo shoot (see Gallery below) I just took up a seat in the late afternoon and soaked in all the good vibes.  I’m more familiar with Buddhism than Taoism, but all I know is I was really enjoying the well kept grounds, the cool breeze and the slight smell of incense every so often.  With the fantastic view I was in no hurry to leave.  And then, after about 2 hours it was all shattered.  What do I hear?  Can it be??  What is the one thing that could ruin a moment like this?  A live marching band.  I kid you not.  A live and very loud marching band doing their practice and it was too loud to ignore.

And to top it off, it was not only the SAME song over and over.. it was the SAME song another marching band played at the mall that I heard last month.  The SAME song that I heard a marching band playing while I passed by in a Jeepney near the harbor.  I’ve heard that song at least 75 times now.. I could practically play it on a snare drum at this point. I asked my girlfriend about it and she laughed, saying that same song seems to be the only one they teach any of the marching bands because she’s noticed it as well from living in Cebu all her life.

Well.. screw it.  The mood was broken.  Tranquility and marching band do not mix.  Maybe if it had been bagpipes I would have been a bit more flexible.  But.. no.  So I called for a cab and went to the Ayala Mall in Cebu City.  I was only there for about 20 minutes when I came across some young men playing chess.  They asked if I’d play so I accepted.  I won in less than 30 moves, didn’t lose a piece and took his Queen before dealing the final Check-mate.  It was a sweet victory.  I took their photo, also in the gallery.  We talked a bit before I was on my way again.  Hope you enjoy the photos, there’s plenty of them.  Feel free to add any photos you like to your Pinterest account if you have one.  🙂