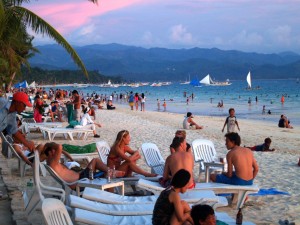 There is a book titled, “The Ugly American” which was later adapted to a movie starring Marlon Brando. Essentially it is a fictional story of two sets of Americans in an Asian country and the way cultural tensions are handled by each. (to greatly understate the plot). But the reason I reference it is because for years we Americans have always had strong opinions, and stereotypes, about the foreigners who come to live in our land.. and that is aside from whether they came here legally or illegally. Many people just mentally lump ‘foreigners’ all into one pile. However, it is time for the shoe to be on the other foot. In my own case, at least. For I soon plan to relocate overseas to the Philippines as my new home. The US will become my ‘vacation’ spot every few years. A big change to say the least.

Now, I am Hispanic, Latino, Mexican-American.. whatever it is they call people like me who simply consider themselves a natural-born American. Yet.. for years, I have been adamant to ‘my’ people of Mexico who come to the US that they assimilate to life here in the US. Learn English, learn the customs (like.. not showing up at my house any and every day of the week without calling first. ugghhh.) and be a good example of your country. No wonder so many Americans have a poor image of Mexican immigrants. They want all the benefits, but don’t think enough of our language to learn it. I will not digress any further.. my point being, are we so puffed and offended that we cannot think for a moment that other countries have dealt with the same issues regarding Americans who come to their country? Hence.. the Ugly American.

Because I plan to move to the Philippines I am now taking my own advice. I am soon to be the foreigner living in a land of citizens, myself without citizenship. Therefore I plan to acclimate to their food. It is me who needs to make the effort to learn the language. Many do speak English, but with a heavy accent and it is I who must be patient and attentive. I’m damn lucky to be going to a country where they even speak English or I’d be hard-pressed to learn complete Tagalog very quickly. (I do hope to learn the basics with time.) Meanwhile, it is not my place to complain of their food or their version of US dishes. I do not have magnanimous “rights” just because I come from America. If anything, I’m always one plane-ride from being deported if I get out of line with the Law.

It is not their job to make me comfortable. It is my job to acclimate and adapt to their everyday life. Period. And that’s exactly the way I want it. One of the reasons I’m not choosing Manila is because I do NOT want a Filipino version of the US lifestyle. I want to become embedded in their own way of living. If I wanted something like Los Angeles I’d have moved there years ago. No, rather I seek the best of their country while understanding that I cannot expect to find all the creature comforts I have come to expect in daily life here in the US.

I do not want the Filipino people to think we are all just a bunch of Ugly Americans. Rather, I want Filipinos there who come to know me to say, “You know.. most of these foreigners are good-guys.  A few bad, but most of them.. good guys.” It’s not a hard thing to accomplish really. It’s just a little thing my parents called, ‘respect for others’.