Believe it or not, in my 49 years I had not until recently ever had a real massage. Ever.

Even as far back as high school I’ve always had this neurosis about strangers touching me. I don’t mind bumping into people shoulder to shoulder in a crowded place, that’s to be expected. But for someone to actually put their hands on me to touch me.. they have to either have a professional reason (doctor’s exam, barber’s haircut, arresting officer, etc.) or I have to know them well enough that they are on my ‘green’ list. Family, friends and girlfriend make the list of course and I’m a very affectionate person. I always greet my Mom, Sons, Daughter and a few close friends with a big hug regardless of where we meet. But in the States the only reference I ever had to the word, ‘massage’ was that of an image including some neon ‘Massage – 24 Hours’ sign flickering at the end of some dark alley on the bad sign of town.

Over the years a girlfriend of wife might give me a half-baked 30-second ‘shoulder rub’.. but that’s about it. Nobody that actually knew what the heck they were doing. In addition I also had it in my mind that the whole thing was a big scam.. some sort of hocus-pocus nonsense that was purely subjective. How could rubbing someone do anything to help with sore muscles? It just didn’t make sense to me any more than someone saying that if you put an onion in your hat it will cure baldness. Yah, I know they have schools for it and everything. People get certificates in it. But for a hundred bucks a person can also become high priestess of their own religion ordained by the State to perform weddings too. I wasn’t buying it. For almost five decades I just figured the whole thing was a sham for the real business.. the “oldest profession”.

So then, I come to the Philippines. After a few months of getting situated and checking out the local scene I had to begin getting back to work doing my online ventures. I’m not exactly what you’d call a month-to-month workaholic. I think in terms of ‘Projects’ not schedules or hours. Timelines and goals 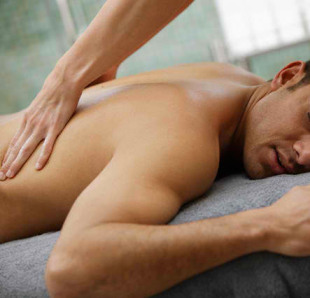 make more sense to me than just putting in hours. So when I begin a new project such as building a website or creating graphic ads for a client, getting some writing done or learning a new piece of software.. I go at it full-throttle. And I do mean full-throttle, with no distractions. I will crawl out of bed, go straight to the laptop and pick up where I left off. Then, sometime around 5pm that day I will realize I still haven’t showered or eaten anything. Seriously. After reluctantly doing so I then go back to the project and work on it until somewhere between 2am to 5am.. whenever my body just gives out and then, repeat the cycle until the project is completed. Maybe that’s why I’m such a procrastinator at times. I know that if I start a project it’s going to be a hard ride for my body until it’s completed. I will admit though, it’s not always all-work.. I’m an avid Facebook and News addict as well so that sporadically eats up some of the ‘work’ time along the way.

Oh.. but I always sleep SO good when I lay my head down each night.

As you can imagine, spending up to 15 hours straight on a keyboard is kinda tough on the body. I keep bottled water next to me to keep hydrated and have gone through countless bottles of eye-drops to keep my eyes from drying up into dust. Tylenol helps with the eye-strain headache if necessary and Melatonin makes sure I fall into an intense, deep sleep (safely). But over the years it has been that pinched feeling between the shoulder blades and lower back that is always the killer. The shoulder tightness isn’t much fun either. Motrin helps a bit and that’s about all I’ve ever done to deal with it other than going to the nearest L.A. Fitness to use their sauna and hot-tub. But here in the Philippines I’ve yet to find a sauna or hot-tub locally. However.. there are more massage places here than you could shake a stick at.

So since my girlfriend knows the limits I push myself through, for the last few weeks she’s been urging me to visit a massage place nearby and get a massage to deal with my muscle aches from so much typing. But I still have the heebie-jeebies about the whole thing. Especially knowing that some, not all, but some of the massage places even she told me are fronts for “extra-special, happy-ending” massage to be done at a later time or place. Now, I’m not a prude and I’ve been in some extremely sketchy places, it’s not that. It’s just that every time I considered getting a massage I kept thinking I’d not only have to wear some mini-gown like in the hospitals but it still boils down to letting someone I’ve only seen for maybe 3 minutes start grabbing me all over “like she knows me”. I don’t know this person. What if she tries to kill me? Meanwhile my girlfriend gets unlimited massage with her gym membership and her Helper at home also knows how to give massage. So she gets one practically every 2 or 3 days. Sometimes twice a day if she’s been out driving a lot.

So, after three weeks at her suggestion I finally went in to one of the larger massage parlors (just saying that makes me feel dirty) and inquired within as to their rates and services. The price.. no problem. A simple ‘dry massage’ for 250 Pesos. (I had to have them explain to me what a ‘dry’ massage is. No oil. Got it.) A one-hour dry massage for about $6 USD.. not too bad considering my Mom gets a massage at a resort once a month and pays about $75 including gratuity back in the US. Then the three ladies behind the counter began flooding me with info about Oil Massages, Thai Massage (but I’m not Thai.. or did they say ‘Tied’?), Swedish Massage (sounds painful, I imagine a huge blonde woman with thick fingers) and a couple other massages that involved river rocks, glass jars and candles. It was really starting to freak me out.

I took one of their cards and told them I’d have to think about it first. I haven’t been back since. Meanwhile, the muscle pains continued. And then it finally hit me. My maid had mentioned about a month ago that she once worked at a massage place. But I’d gotten distracted with her story of how the manager was always chasing her around the table and forgotten all about it. I get along with her fairly well since she’s an amiable, but respectful person. We usually have conversation while she’s cleaning my studio. So I asked her if she’d mind making some extra money giving me a massage. As it turned out I was also suffering from a cold at the time and she said a massage would help alleviate that as well. I’m still a bit skeptical about that but, she came to my place and proceeded to give me my very first, official massage.

I felt a bit awkward at first but my part was easy.. all I had to do was lay down. The first time it started out a bit painful at points. She said I was really tensed up. But as she talked about her boyfriend and her Dad she went about working my muscles with some kind of mineral oil that smelled kinda like Vick’s Vapor rub.. but slightly different. Within 20 minutes I began to relax and by the time she was done I sat up and.. wow, this stuff really works!

I moved my arms about and I could tell there was no longer the stiffness I’d had just an hour before. I kept asking myself if it was just some sort of placebo effect but, no.. I actually felt better and ready to tackle the laptop anew with fresh vigor. I gladly paid her and gave her a tip as well. Once she left I walked about the studio feeling somewhat serene and balanced. I was ready to go two rounds with Mike Tyson now. Well, most of the first round anyway.

Needless to say my girlfriend did not share my exuberance. But that’s another story for another time. She’d have preferred I went to the gaggle of young lovelies down the street, behind some curtain in a little room where they’d have their way with me. A woman I’ve only known for 3 minutes hardly makes it onto my ‘green’ list so, for now I’ll have to postpone any parlor experience and a resulting review for some other time. Also, after getting a massage the last thing I felt like doing was walking back home over broken pavement for five blocks. It was so much nicer to just follow up with a quick nap and a shower at home. But letting some pretty young lady from the massage parlor down the street into my studio for a home-massage is probably going to go down even worse than having my maid do it so, I’ll hold off on that as well.

All in all, I can say that this skeptic is now a believer. Massage is not a form of quackery, it actually does make you feel better in a physical sense if not also a mental sense as well. I hear some places will dim the lights, light candles and play Kenny G on the down-low while you get your massage. In that sort of environment I think I would just fall asleep in ten minutes. But.. hey, baby-steps, right?