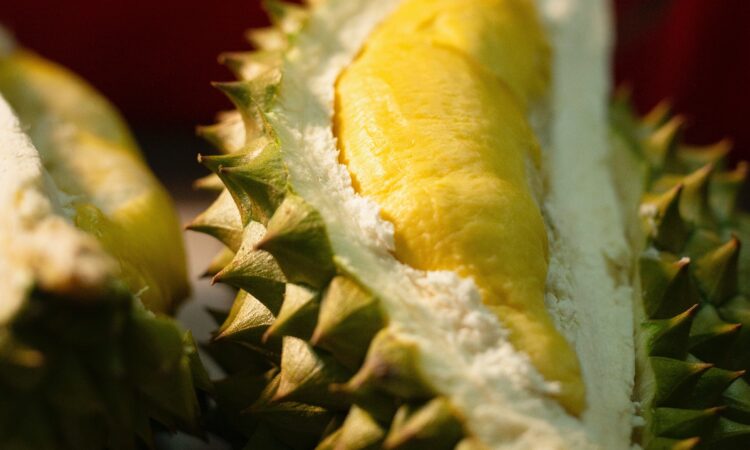 Durian is a tropical fruit known for its distinct, strong smell and creamy, rich flavor. It is beloved in many parts of Southeast Asia, including the Philippines, where it is often referred to as the “king of fruits.” But did you know that the city of Davao in the Philippines is considered the durian capital of the country?

In this article, we’ll explore the reasons behind Davao’s reputation as the go-to place for high-quality durians. So, why is Davao considered the durian capital of the Philippines?

The ‘unique’ smell of durian

Durian is a tropical fruit known for its distinct, strong smell. While many people love the taste of durian and consider it a delicacy, there are also those who are turned off by its odor. In fact, the smell of durian is often described as unpleasant or even foul, with some people likening it to rotten onions or sewage.

This strong smell is one of the reasons why durian is often prohibited in certain places. Many hotels and taxis in Southeast Asia, for example, have strict rules against eating durian due to the fruit’s odor. This is especially true in countries like Singapore, where the smell of durian is considered to be a nuisance.

Despite its strong smell, durian is still a popular and beloved fruit in many parts of the world, particularly in Southeast Asia. While some people may not care for the smell, others find it to be an essential part of the durian experience. Ultimately, whether or not durian has an unpleasant odor is a matter of personal preference.

History of durian cultivation in Davao

Durian has been grown in the Davao region for centuries, with local legend stating that the fruit was introduced to the area by Muslim missionaries in the 14th century. However, it wasn’t until the 20th century that the durian industry in Davao really began to take off.

In the 1970s, the Philippine government established a program to promote the cultivation of durian and other high-value crops in the region. This, combined with the favorable climate and soil conditions in Davao, led to a rapid expansion of the durian industry in the area.

As the industry grew, so too did the reputation of Davao’s durians. The city’s durians were praised for their high quality, with some varieties such as the “Musang King” becoming highly sought-after. Today, Davao is known as the durian capital of the Philippines, with the fruit playing a significant role in the local economy. The durian industry supports the livelihoods of thousands of farmers and industry workers in the region, and the city is home to numerous durian processing and packaging facilities.

In summary, the history of durian cultivation in Davao can be traced back centuries, but it was the government’s promotion of the crop and the city’s unique climate and soil conditions that led to the growth of the durian industry and the establishment of Davao as the durian capital of the Philippines.

Why does durian grow so well in Davao?

One of the key factors that have contributed to the success of durian cultivation in Davao is the city’s tropical climate and fertile soil. Located in the southern part of the Philippines, Davao has a warm, humid climate with temperatures ranging from 21 to 32 degrees Celsius (70 to 90 degrees Fahrenheit) throughout the year. This climate is ideal for durian trees, which need warm temperatures and plenty of moisture to thrive.

In addition to its warm climate, Davao is blessed with fertile soil that is well-suited for growing a variety of crops, including durian. The region’s volcanic soil is rich in nutrients and has good drainage, which helps to support the growth of healthy durian trees.

Together, the tropical climate and fertile soil in Davao provide the perfect conditions for durian cultivation. The warm temperatures and high humidity help to ensure that the fruit develops its characteristic creamy texture and rich flavor, while the fertile soil provides the nutrients that the trees need to grow and produce a good yield. It is no wonder that Davao has become known as the durian capital of the Philippines.

One of the main reasons why Davao is considered the durian capital of the Philippines is the city’s reputation for producing high-quality durians. There are several varieties of durians that are grown in the region, each with its own unique flavor and texture. Some of the most popular varieties include the “Musang King,” “D101,” and “Puyat.”

The “Musang King” is perhaps the most famous variety of durian from Davao, known for its creamy, rich flesh and sweet, complex flavor. This variety is highly sought-after and commands a premium price due to its popularity.

In general, the durians grown in Davao are known for their high quality and rich flavor. They are often considered to be some of the best durians in the Philippines, if not the world. In comparison to durians from other regions, those grown in Davao are often considered to be sweeter, creamier, and more flavorful. This is due in part to the city’s unique climate and soil conditions, which help to produce high-quality fruit.

So, if you’re a fan of durian and want to try some of the best the Philippines has to offer, be sure to look for durians from Davao. You won’t be disappointed.

Economic impact of the durian industry on Davao

The durian industry is a major contributor to the economy of Davao, providing income and employment to thousands of people in the region. The size and scope of the industry are impressive, with thousands of hectares of land dedicated to durian cultivation and numerous processing and packaging facilities located in the city.

In terms of economic impact, the durian industry in Davao generates millions of dollars in revenue each year. The city is a major exporter of durian, with the fruit being shipped to markets around the world. The industry also supports the livelihoods of local farmers and industry workers, with many people in the region relying on the durian industry for their income.

In addition to its economic impact, the durian industry in Davao also plays a role in preserving the region’s cultural heritage. Durian has a long history in the Philippines, and its cultivation is an important part of the local way of life in Davao. The industry helps to preserve traditional farming practices and supports the local community by providing jobs and income.

Overall, the durian industry in Davao is a vital part of the local economy, with its economic and cultural significance making it an important contributor to the city’s development and success.

In conclusion, Davao is considered the durian capital of the Philippines due to its long history of durian cultivation, its unique climate and soil conditions that are conducive to the growth of high-quality fruit, and its reputation for producing some of the best durians in the country. The durian industry in Davao is a major contributor to the local economy, supporting the livelihoods of thousands of farmers and industry workers and generating millions of dollars in revenue each year.