It’s been three weeks since I made the move here to the island of Bohol.  The home I live in is not located in town, but rather about a mile or so outside the edge of town.  It is in the jungle area known here as the ‘province’ area.  I guess province sounds more inviting than “surrounded by trees and cobras“.  Aside from two quick rides I got from the neighbors to get some groceries at the mall, I’ve pretty much been stranded out at my little corner of ‘the village’.

I’m still debating whether it’s better to get a motorcycle soon or a minitruck later in the year around summer.  I could use some transportation now, but getting a minitruck would (in the long run) be not only safer but allow me to carry groceries, furniture and other supplies back to my place.  So I figured I’d had enough of just waiting around and decided to walk the distance from the edge of town (where the mall is) back to my own place to see if I could do it.

The only thing is that the ride I’d be getting wasn’t leaving until around 4pm and since I planned to catch a movie as well as get some dinner.. that meant making the walk home in the dark.  Fortunately for me it was a full moon that night.  In retrospect a few days later, attempting this with no moon would have pretty much guaranteed I’d have gotten lost until morning.  I’d been paying attention to various landmarks and forks in the road.  I felt 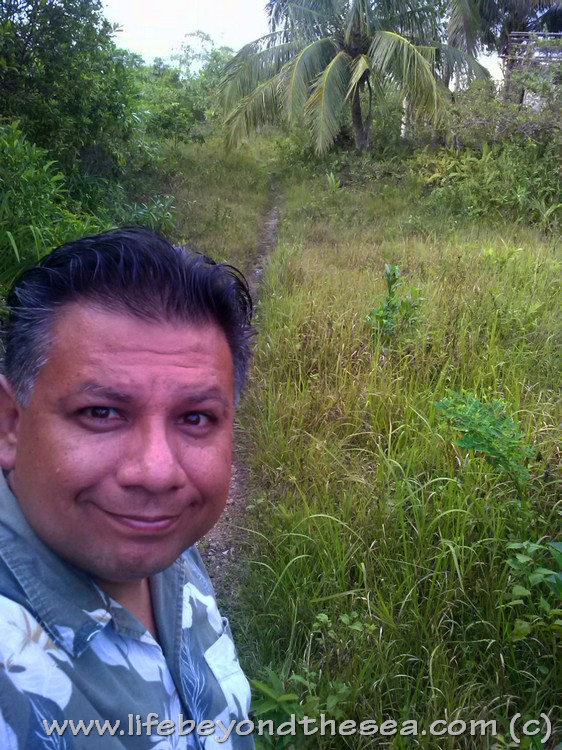 confident enough that I could find my way back.  I did make one wrong turn at one split in the road but quickly back-tracked.

Even though it was about 10pm the weather was about 70*F.  Being on an island with very little city means you can see the stars at night very clearly.  It’s difficult to really express just how insanely beautiful it is to be out there at night, just surrounded by trees in every direction.  In some points, no homes anywhere around.  After the first hundred yards there are no more street-lights until you get near some homes where the village starts.

But it was not a very long trek as it turned out.  From the mall to the edge of town was only 10 minutes.  From that point to my home was another 30 minutes.  Walking it at night was very nice.  I’d imagine if I walked it in the day I’d need an umbrella for shade and bring along some water.  So now that I have a better idea of how far it is to town, and that I can walk it if necessary, it’s now feasible for me to walk to the terminal and catch a jeepney to anywhere on the island, either Tagbilaran or Panglao.  Panglao is where all the cool beaches are and lots of the tourist spots are located.  But I’m also interested in all of Bohol which I plan to explore one piece at a time.

I shot a little bit of video as I took my walk, hope you enjoy it.  🙂