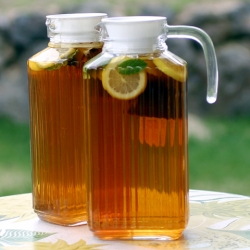 As with anything else it seems everyone has their own way they go about making Sun Tea. Surprisingly here in the Philippines I’ve not run into too many people who make their own Sun Tea at home.  (At least not in the barangays I’ve lived in so far.)

Back when I was a kid I had a friend who would make Sun Tea at the bottom of their swimming pool. During my visits to Arizona and Texas, making Sun Tea was a very simple matter. All you needed was a large, preferably glass, container, some tea bags, water and sunshine. It was always so hot in Arizona or Texas that pre-heating the water was not necessary. In California, pre-heating the water and then setting it outside in the sunshine for the afternoon to brew is what we usually did. 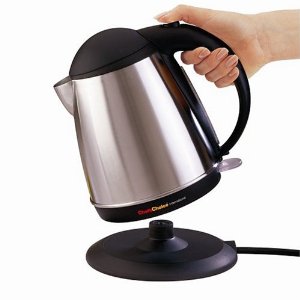 quickly. I have two containers which I use for making sun tea, this way I always have one brewing and one in the refrigerator staying nice and cold.

When I start a fresh batch I will pour boiling water into a 2.5 liter plastic container and add about 4 tablespoons of brown sugar to dissolve into the hot water. I then place two Lipton tea bags (Yellow label) into the water and place the lid with the tea bags at  the top, inside. Doing it this way I don’t need to add sugar every time I pour myself a glass of cold, iced tea. Every once in awhile instead of brown sugar I will use local honey if I have picked some up from a vendor nearby.

Even among expats it is rare that I run into someone brewing up some Sun Tea out on the porch. My buddy, Alan, is so far the only other person I know doing this. And most restaurant’s here in the Philippines when you ask for iced tea almost always what you will get is the powdered Nestea that comes in a package. Even though I don’t mind the Nestea, I do have to say that it is a bit too sweet.

As for what can be added to Sun Tea, here are a few recommendations;  A few slices of lemon dropped in after the brewing is completed is a traditional choice. Others prefer a few leaves of mint. Here in the Philippines the most available citrus juice is a very small fruit known as Calamansi. If using, Calamansi it is best to strain out the seeds (I use a fork) as they are quite bitter. Still others might 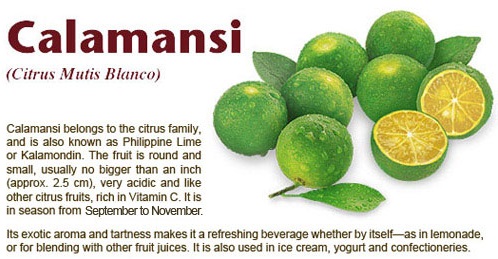 prefer a few thin slices of cucumber in their tea. And while it is not my preference, I suppose even a pinch of cinnamon or a stick of cinnamon could be added.

I don’t suppose iced tea is something that would remind most Europeans of home, however for an American south-west guy like me, kicking back on a hot day out on the patio with a cold glass of iced sun tea is a refreshing slice of home.