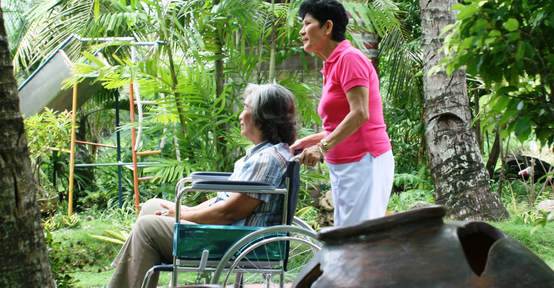 There’s a part of the culture here in the Philippines, which I’ve heard a lot of guys complain about it, but when you really think about it, it’s more of a positive attribute than a negative one. One that I think we in the United States and much of the Western culture could really benefit from examining. And it’s that of honoring your parents.

And what I mean by that is, when you come here and you meet a Filipina, then you get engaged, get married…. the issue is always going to come up that their parents need some kind of help.. Because in the Philippines typically the parents don’t make a lot of money. And they maybe never did make a lot of money in so many cases. Nor do they have any type of retirement pension in place in most cases.

Now, there are wealthy Filipinos here, don’t get me wrong, But there’s not much middle class and a vast majority are grossly under-employed and underpaid. And so often the parents of the girls you’ll meet, especially if you’re gonna meet a girl from the province, her parents are barely squeaking by. They have zero retirement fund. Zero. And as they’re getting on in years they need some help to buy the basic necessities such as food, water and electric. And the people they look to for help are their children.

And so along we come as the happy-go-lucky expat guy and we fall in love with this Filipina. In our mind, we’re thinking we’re just gonna whisk her away and make her life wonderful. Maybe we take her back to our home country or build a house on another island and just kind of visit the in-laws once in a long while.

Well, you find out really quick… No. If she is a good woman, she has a good sense of responsibility and love to see that her parents are not left in harm’s way due to a lack of finances. When it comes to honoring her parents,. her parent’s welfare is very high on her list. If she doesn’t give a damn about her parents, already. I’ve just lost respect for that girl. A lot of the women you will meet here, they’re very close to their parents and take the definition of honoring their parents seriously. They realize it’s not just in the tone that you carry to show you’re respectful of parents. It’s not just that you don’t use swear words when you’re around your parents.. That’s not the total encapsulation of honoring your parents

Honoring one’s parents includes seeing to it that they are comfortable. That they have food to eat. They have health care that they need. Knowing that they are cared for in the way you’d want to be cared for when when you are elderly. You would hope the same from your children.

Another sobering thought to keep in mind is this thought. Any woman who would turn her back on her own flesh and blood parents for a “better life” with you… what do you think will happen in the future when You are the one who is elderly? Do you really think she won’t abandon you just as easily?

When you marry a woman, you really should have the knowledge and understanding that her parents are important to her. Therefore, by extension, if you truly love this woman.. her parents should important to you as well. You can’t expect her to just run off and abandon her parents to poverty while enjoying a much more lavish lifestyle with you. If she can do that you really have to question the character of such a woman.

I do believe that there is a certain responsibility to care for the for the parents. Again, it doesn’t mean you’re obligated to put them in a lap of luxury. It doesn’t mean they get everything they want. It doesn’t mean they get to set whatever budget they expect. But I do believe that there is a common middle ground there that you can in good conscience make a decision with your girlfriend/wife and say, “Okay, this is what we’re going to give them financially per month. This X amount, this is their retirement budget per month. And if they want anything more than that it will be on a case by case basis.”.

As you may have noticed I have been speaking on her obligation to honor her parents. To care for her parents. That is where the obligation ends. She is not obligated to provide the same support for her siblings, cousins or neighbors. Sadly, in Filipino culture it is often assumed by the brothers that somehow you (the ‘rich foreigner’) “owe” them something simply for being with their sister.

They can assume all they want. They can try to guilt her into financial expectations. But that has no bearing on anything. If you do decide to help a niece or nephew, brother or sister.. it is your choice and that choice might be ‘No’ or ‘Yes’. But just as none of her siblings was providing for her finances prior to your arrival, she as well is under no obligation to them.